Catholic Church of Our Lady of Walsingham, Corby 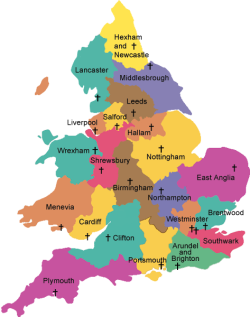 The Catholic Church of England and Wales is split into 22 Diocese' (areas) led by a Bishop (or in some cases an Archbishop) with a Cathedral as a 'mother church' for the area. It is a beautiful thing as a parish to be part of the wider Diocesan family and there are opportunities throughout the year to join together to celebrate our faith - a particular favourite of Canon Michael's is at the Chrism Mass during Holy Week. If you get the opportunity then definitely head over to the Cathedral on the morning of Maundy Thursday to join with parishioners and priests from across the Diocese for a wonderful celebration. 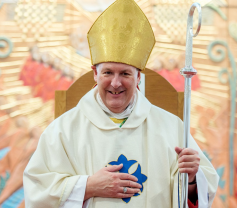 The Northampton Diocese is led by Bishop David Oakley who resides at Bishop's House next to the Cathedral of Our Lady Immaculate & St Thomas of Canterbury.

He replaces retired Bishop Peter Doyle who is pictured here. 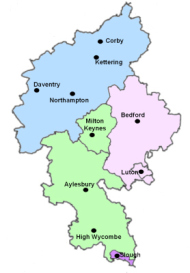 The Diocese itself is divided into 11 Pastoral Areas with 69 principal parishes and another 27 "Mass centres" - places where Mass is celebrated in smaller churches, chapels and chaplaincies. There are also 39 Catholic schools at infants/primary level, 6 at secondary/upper level and 2 "all-through" schools. As a parish and town we are at the Northern end of the diocese which stretches all the way down to Slough.

It would be impossible to explain all the different aspects and departments that make up the whole diocese but if you would like to learn more then visit the Northampton Diocese website by clicking here. 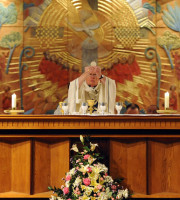 The Cathedral also has it's own website which includes live streams of its Masses and services - if you haven't seen the cathedral in person yet it's definitely worth at least a visit to the website by clicking here.

If you can make a visit in person to the Cathedral then you will be glad to know that Fr Mark Floody, the Dean of the Cathedral, is actually a born and bred Corby lad and is always glad to hear how things are in his hometown.

A short history of the Diocese of Northampton

The Catholic faith first came to Britain in Roman times. St Alban, our first martyr, probably suffered in the year A.D. 209. Three bishops from Britain attended the Council at Arles in A.D. 314.

In 597 St Augustine came from Rome to convert the pagan Angles, Saxons and Jutes who had invaded and settled in Britain after the departure of the Romans. His work of conversion was concentrated largely in the kingdoms of Kent and Essex. It was not until some thirty-eight years later that the area covered by our present diocese received the Christian message, with the arrival of the missionary St Birinus and the foundation of his see at Dorchester on Thames on 636. The real evangelisation of the people who dwelt in our district, the Middle Angles, was achieved through the labours and missionaries from the isle of Lindisfarne, off the Northumbrian coast. Notable among them was St Chad, whose see, established at Lichfield in 669, included the present diocese of Northampton.

A few years later, to meet local needs, Archbishop Theodore of Canterbury divided the Mercian see of Lichfield and founded the diocese of Leicester for the Middle Angles. There it remained until the ninth century when the disruption caused by the Scandinavian invasions necessitated its transference to the safer original site at Dorchester on Thames. With a major reorginisation of the diocesan system in the Norman period, the ancient see at Dorchester was brought to an end. In 1072, Remigius, its last bishop, was translated to Lincoln, under whose jurisdiction the territory of the present diocese was to remain for many centuries.

From the time of the Reformation until 1850, Roman Catholic Dioceses ceased to exist in Britain. As a result of heroic sacrifice by clergy and the laity alike, the Faith remained alive and from 1685 to 1850 was governed by Vicars Apostolic, who reported to the Cardinal Prefect of the Roman Congregation of Propaganda Fidei.

On 29 September 1850 by Letters Apostolic, issued by Pope Pius IX, the English Heirarchy was restored, and the diocese of Northampton came into being, covering not only the area of the present Diocese but the whole of East Anglia.

On 13 March 1976, by the decree Quod Ecumenicum, Pope Paul VI formed the diocese of East Anglia for the counties of Cambridge, Norfolk and Suffolk. The territory left to the diocese of Northampton covers Bedfordshire, the old county of Buckinghamshire including the Slough area, and Northamptonshire

See Current Newsletter for all other Mass times

Our Lady of Walsingham